Patients with Superior Semicircular canal dehiscence (SSCD) Syndrome will experience unique auditory (hearing) and/or vestibular (dizziness) symptoms. This condition is caused by a thinning or absence (dehiscence) of bone overlying the superior semicircular canal (SCC) of the inner ear. This structure provides sensation of tilting movements of the human head and is also tied closely to sensations of acceleration and specialized hearing/balance reflexes (e.g. turning your head toward a very loud sound instinctively). 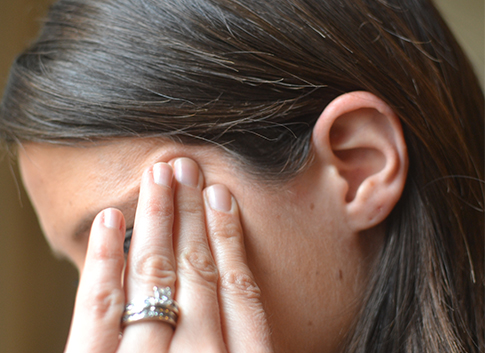 The normal anatomy of the human inner ear (organs of hearing and balance, which are located immediately adjacent to each other and are connected) is encased in very thick bone with only two ‘windows’ through which sound energy can enter and leave. This is vital to how we hear and is important in keeping sound/noise from causing us to be dizzy. The absent bone associated with SSCD creates a ‘third window’ which permits sound energy/ pressure to dissipate into the vestibular (balance) portion of the inner ear and may cause unusual symptoms involving both hearing and balance.

Patients with this condition may complain of fluctuating hearing loss, hearing their own voice or other bodily noises (autophony), pulsatile ringing in the affected ear, and/or dizziness or eye movement triggered by sounds (Tullio phenomenon). Vestibular symptoms of unsteadiness and/or false perception of motion may also be provoked by coughing, laughing, straining, nose blowing, and exercise/exertion. The presentation of SSCD is often unique to each patient, and individuals may exhibit some but not all of the above symptoms.

The diagnosis of SSCD is based upon specialized testing that will be ordered by Dr. Stevens and Dr. Whitaker. This may include directed physical examination, audiometric testing, vestibular evoked myogenic potential testing (VEMP), electrocochleography (ECOG), and CT imaging of the ear. Some of these tests may already be complete by the time you see our AEI surgeons.

Most patients with a confirmed diagnosis will not require an intervention. Some individuals are satisfied with an explanation for their symptoms, and the recommendation to avoid stimuli, such as vigorous nose blowing, straining, and scuba diving. Such patients are further counseled to anticipate vestibular symptoms when exposed to loud noise and rapid air pressure changes during air travel.

Some patients, based upon their occupation or lifestyle, may elect for surgical treatment of their SSCD. Consideration of this option will entail a detailed discussion between you and your surgeon. Surgery is considered for patients that are severely impacted by their associated auditory and/ or vestibular symptoms.

The goal of surgery is to plug the affected superior semicircular canal and resurface the overlying bone with a small bone graft to ‘close the third window’. This is generally performed via one of two approaches: a small opening in the skull called the middle fossa craniotomy or; via removal of a portion of the ear bone called a mastoidectomy. Both approaches have been shown to be highly successful in properly selected patients. If you are interested in the possibility of surgery, our surgical team at AEI will be happy to open a discussion of the treatment benefits, risks and alternatives in a manner that is unique to your individual case.